Welcome to the world of AVIANA HOLIDAYS – the leisure unit of IATA accredited Aviana Travels Pvt. Ltd, completed “28t h Year of Excellence Service” in the space of Travel & Tourism segment. Our experienced and pleasant Tour-Director, who will be with you throughout, will meet & greet you at Kolkata International Airport before journey. She / He will assist you with immigration & custom formalities before boarding flight scheduled to leave Kolkata for Colombo by Air .
Upon arrival in Bandaranaike International Airport, Colombo at around 2AM in the night (next day ideally), you will be safely guided to the hotel for an overnight stay to shed away your stress.

Breakfast and 1st half free on Leisure at Hotel.
After Lunch proceed for the Orientation tour of Colombo. You will pass by famous places including Galle Face Green, the Viharamahadevi Park, National Museum, Twin World Trade Center towers, Old Parliament Building, Fort district, Independence Hall at Independence Square, and prominent Buddhist, Hindu, Islam and Christian places of worship. (Entrance fees to sites not included only visit from Outside).
Evening you can go for shopping for your loved ones, visit to Odel, House of Fashion, Beverly Street, Majestic City, Noritake, etc. could be the best option. Post the shopping experience enjoy the dinner return to your Hotel. Overnight at Hotel.

Today morning after a satiating breakfast get into the coach to be carried comfortably to Kandy with an enroute visit to Pinnawala Elephant Orphanage.

At the Pinnawala Elephant Orphanage you will see how volunteers and caretakers provide shelter and take care of orphaned, abandoned and injured elephants within the park. You can watch caretakers feed, bathe and help these gentle giants. Walking with the herd to the nearby river to watch the elephants bathe and play around in water is a treat to the eyes.
On arrival gear up for a visit to the Temple of the Tooth Relic of Buddha – The Holy Temple of the Tooth Relic (Sri Dalada Maligawa), was originally built under Kandyan kings between 1687 and 1707, but later severely damaged during the 18th-century colonial wars against the Portuguese and Dutch. After the wars, the original wooden structures were restored in stone.
Next, we will enjoy a typical Sri Lankan Cultural Show of Drumming, Dancing, Music and Fire Walking. Later you will be taken for check in to hotel. Stay overnight in Kandy.

Kandy :
Lying amidst the hills, Kandy is the last capital of the ancient kings of Sri Lanka. While being the second largest city in Sri Lanka it is also famous for its immense beauty and is named as one of the seven UNESCO declared World Heritage sites in the country. With its luxuriant prairie, picturesque lake, longest river of the country and misty mountains, Kandy successfully mesmerizes every visitor unsurprisingly

After breakfast, check out and leave for Kandy. En-route we pass by the Dambulla Cave Temple, the largest and best-preserved cave temple complex in Sri Lanka. The rock towers 160 m (520 ft) over the surrounding plains. There are more than 80 documented caves in the surrounding. Major attractions are spread over five caves, which contain statues and paintings. This paintings and statues are related to Lord Buddha and his life. There are a total of 153 Buddha statues, 3 statues of Sri Lankan kings and four statues of god and goddess. The latter four include two statues of Hindu gods, Vishnu and Ganesh. The murals cover an area of 2,100 m². Depictions in the walls of the caves include Buddha’s temptation by demon Mara and Buddha’s first sermon. This cave also holds another history of being the hideout of King Valagamba of the 01st Century B.C who fled from Anuradhapura (The capital city) due to an invasion from South India.
Post lunch return back to Kandy – The last capital of the Sri Lankan kings which is a world heritage site. On the way take outside view of Sigiriya Rock Fortress, A UNESCO World Heritage Site (Entrance fee not included)

Enjoy a delicious breakfast at your hotel. Today you will proceed to Nuwara Eliya with an enroute visit to a Tea Plantation and Seetha Amman Kovil.
Once there in the Tea Plantation you will see how the female workers pluck tea leaves and how the same is processed into the finest Ceylon Tea which is of worldwide repute. The Orange Pekoe tea is considered to be one of the highest grade of tea in the world which is a produce of the Tea Plantations of Nuwara Eliya.
Next we proceed to witness a site of supreme historical importance – The Seetha Amman Kovil. This sacred place is believed to be where Sita Maa was held captive . This place will surely leave you in awe. Later the Ashoka Vatika beckons you to share its part of history narrating how it had met the requirement of Sita Maa . It is believed she used to bathe herself in this stream.

Later we move towards the hotel in Nuwara Eliya for an overnight stay.

Nuwara Eliya (City of Lights), blessed with salubrious climate, breathtaking views of valleys, meadows, mountains and greenery; Surrounded by hills and tea plantations, the town of Nuwara Eliya enjoys spring-like weather throughout the year. It is also known as “Little England”, which was the favorite hill station of the British who tried to create Nuwara Eliya into a typical English Village. The old brick Post office, country house like hill club with its hunting pictures, trophies and strict formal dinner attire; the 18 hole golf course, horse race course, etc., all remind you of “England”.

Today post breakfast we check out and proceed to Yala for an exciting trip to the Yala National Park. Yala with all its flora and fauna is a unique experience and one of the must-sees of Sri Lanka. The park is worth visiting at all times of the year. The park is best known for its variety of wild animals. It is important for the conservation of Sri Lankan elephants, Sri Lankan leopards and aquatic birds. On arrival at the park enjoy a safari to spot the major games in the park. Spend the night safely at Yala.

Enjoy your Breakfast at Hotel. Check out and proceed for your journey to Bentota.

Bentota is the city of the Golden Beaches. You will be able to relax and feel the spirit of the sea and the warmth of the soft sand. The day is divided in between swimming in the water and bathing in the sun. Bentota provides the perfect turf for unfurled vacation at the beach. While enjoying the sun, sea and sand the water sports lovers can enroll themselves in various water sports bringing in the unique pleasure of this locale.

After a scrumptious lunch visit an exciting trip to the Turtle Hatchery at Kosgoda. The Turtle Hatchery Project is another important attraction. Up to five endangered species of turtles have been frequenting a stretch on this undisturbed beach for a long time now.

The turtles are allowed to hatch and thrive in a protected area before being set free. A visit to the turtle hatchery is a must for nature lovers.

Post this visit an Orientation tour of Bentota along with a historical trip to Galle awaits you. The Galle Fortress will leave you mesmerized as this Fortress was built by Portuguese in 1588 and even after being so old still continues to hold its charm.
After this attraction proceed to the hotel for a relaxing overnight stay.

Day 8 (In Bentota – Excursion To Mirissa )

Packing your breakfast today at the break of the dawn in the early hours of the morning prepare yourself for an exhilarating trip to Mirissa from where you will be taken to the mid of Indian Ocean for Whale Watching . Here in this trip hold your breath while species like the Blue Whale, sperm whales, fin whales, Bryde’s whales, short finned whales, dolphins and rarely killer whales and whale shark are spotted springing out of the water with joy and bouncing back with a huge thud.

Post the tour have your lunch and return back to Bentota Hotel and rest overnight at Bentota.

Enjoy your breakfast at hotel.
Free time on Leisure until check out. Check out and transfer to Colombo International Airport for your return flight back to India. 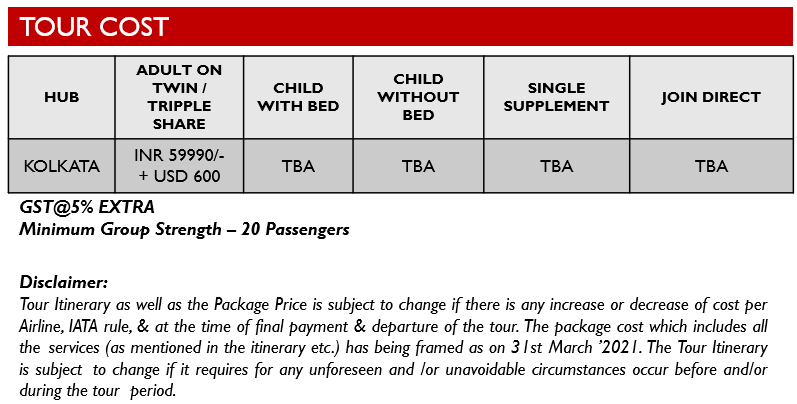