On arrival at Bangalore Airport , you will be received by our local representative. Proceed to Chikmagalur.

Chikmagalur is a calm & serene town…carved against a mountainous canvas… full of scenic surprises…hills, valleys, streams and the aroma of coffee wafting in the misty air. This famous coffee town is located at a height of over 1900 meters in a luxuriant valley south of the Baba Bundangiri range…blessed with silver cascades of mountain streams, rugged mountain trails and lush vegetation.

En route visit Belur and Halebid – the temples of Halebid bear mute testimony to the rich, cultural heritage of Karnataka. Check in to the hotel and leisure. Stay overnight at the hotel.
[Lunch & Dinner]

Chikmagalur is a district situated in south-western part of Karnataka, India. Rivers like Tunga and Bhadra have their sources in the mountains here which are part of the Western Ghats.

Early morning trek to the Z Point (Optional). After descending, have the hot breakfast. You’ll be amazed when visiting to the Kemmangundi & Kalathigiri Falls. Back to hotel by afternoon. Stay overnight at the hotel.

Day 3 Coorg – The Scotland of India

Morning after breakfast check out from your resort and drive to Coorg or Kodagu as it is officially known is one of the tiniest district in the southern part of Karnataka. It is the largest producer of Coffee in India. Pepper, Cardamom and oranges are grown extensively in this part. It is one of the major places that get heavy rainfall in India. On arrival, check in to the hotel and rest of the day at leisure and for shopping. Overnight, stay at the hilly Coorg.

Day 4 Coorg – The land of Cauvery

Coorg (locally Kodagu) promises to greet everyone visiting it with the melodious chirping of some of the most exotic species of birds that one can find in India. After breakfast, proceed to Talacauvery the birth place of river Cauvery and Bagamandala. Later visit Abbey falls, Omkareswara Temple, Iruppu falls, and Madikeri Fort. Return back to hotel for dinner & overnight stay.

After breakfast proceed to Masanagudi close to The Mudumalai National Park and Wildlife Sanctuary which is also a Tiger Reserve, lies on the northwestern side of the Nilgiri Hills (Blue Mountains) in Tamil Nadu.

It shares its boundaries with the states of Karnatakaand Kerala. The sanctuary is divided into 5 ranges – Masinagudi, Thepakadu, Mudumalai, Kargudi and Nellakota. The protected area is home to several endangered and vulnerable species dinging Indian elephant, Bengal Tiger, Gaur and Indian Leopard. There are at least 266 species of birds in the sanctuary, including critically endangered Indian White-ramped Vulture.
The Western Ghats, Nilgiri Sub-Cluster (6,000 km2), including all of the Mudumalai National Park, is under the consideration by the UNESCO World Heritage Committee for selection as a World Heritage Site.
Later, we’ll go for an exciting Safari in the Masanagudi or Mudumalai Forest reserve. Have dinner and stay the night at Masanagudi.

After breakfast you will proceed to Ooty. Ooty was originally known as Ootacamund which is now obscure. Ooty is situated in the Nilgiri hills, also known as The Blue Mountains. It is unknown whether this name comes from the blue smoky haze given off by the eucalyputus trees that cover the area, or because of the kurunji flower, which blooms every twelve years giving the slopes a bluish tinge. Upon arrival, check into hotel and day free for leisure. Stay at an awesome serenity in Ooty hotel.

After breakfast you will depart for a full day sightseeing of Ooty. Later visit Botanical Gardens, Ooty Lake, Doddabetta Peak, Dolphin Nose & Ketti Valley. Doddabetta is the second highest mountain in the Nilgiri Hills, at 2637 metres, after Anaimudi. There is a reserved forest area around the peak. It is 9 km from Ooty, on the Ooty-Kotagiri Road in the Nilgiris District of Tamil Nadu. Ketti Valley View is one of the most famous viewpoints in Ooty. As the name suggests, the site provides a panoramic view of the Ketti valley that extends from the Mysore plateau to the Coimbatore plains. It is one of the most visited tourist sites of Ooty.

The view of Ketti, the largest valley in the world from here is majestic and often compared to views of Switzerland.

In the evening back to your resort followed by dinner in the hotel’s restaurant only. Stay the night in Ooty.

After breakfast you will depart for Mysore. The city of Mysore is known as the ‘City Of Palaces’. There are number of buildings built by the Royal family and are exquisite examples of Dravidian architecture and display grandeur and lavish life led by the Emperors while they ruled the state. On arrival you will check in to your hotel. In the afternoon free to visit Mysore Palace, Brindavan Gardens, St-Philomena-Church, In the afternoon visit the Mysore Zoo, the oldest Zoo in the country, set up by Maharaja Chamaraja Wodeyar in 1892. In the evening return to hotel. Overnight, stay at Mysore.

Morning after breakfast you will be dropped to Bangalore Airport for your flight to Kolkata. Tour Ends with Great Memories. 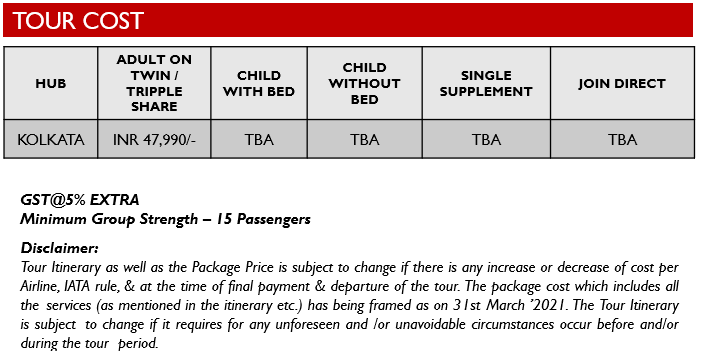