After arriving at Istanbul Airport and completing your Immigrations and luggage claim meet with the Guide will lead you to vehicle to your Hotel for Check in & Leisure  Time. While proceeding towards the hotel packed lunch will be served to you.

Satiate yourself with a delectable dinner on board the cruise .

Later return to the hotel for a comfortable overnight stay.

After Breakfast be picked up from hotel and departure to old city. Visit to Hagia Sophia- I Kebir Mosque (officially known as the Hagia Sophia Holy Grand Mosque and  formerly the Church of Hagia Sophia).

Visit to Topkapi Palace (is a large museum in the east  of the Fatih district of Istanbul in Turkey).
Go for  Lunch at an Indian Restaurant.

Post lunch proceed to Hippodrome (The Hippodrome of  Constantinople was a circus that was the sporting and  social centre of Constantinople, capital of the  Byzantine Empire. Today it is a square named  Sultanahmet Meydanı or Square) and Blue Mosque (Sultan Ahmed Mosque, known as the Blue Mosque, its  bluish interior decoration, is the most important  mosque of Istanbul.

Later visit Grand Bazaar (The Grand Bazaar is one of the largest and oldest covered  markets in the world, with 61 covered streets and over 4,000 shops on a total area of 30,700 m²,  attracting between 250,000 and 400,000 visitors daily). Followed by Egyptian Spice Bazaar (Spice Bazaar, built in 1664, is one of the most colourful bazaar of Istanbul that offers numberless spices, Turkish delights, caviar, dried nuts and more.

After dinner at an  Indian restaurant, be escorted back to the hotel for an overnight stay.

Check out from the hotel after breakfast strictly by 8:00 AM, and board the coach for a comfortable drive to Izmir at first where the group stops for lunch.

Post lunch starts the sightseeing of Ephesus Ancient city. Later from there to the temple of Artemis (The temple was used  at different times as a house of worship and as a  marketplace. The third time the temple was built it was  450 feet long x 225 feet wide. It was 60 feet high and had  at least 127 columns), and Virgin Marys House (Catholic pilgrims visit the house based on the belief that Mary, the mother of Jesus, was taken to  this stone house by Saint John and lived there for the remainder of her earthly life). Check into the hotel at Kusadasi, post dinner and spend a stress free night at the hotel.

After Breakfast, check out from the hotel and be transferred to Pamukkale. Visit to Hierapolis Ancient City (Hierapolis is an ancient  city located on the top of Pamukkale and is a World  Heritage site),

Pamukkale Travertines (Natural  thermal pools surrounded by white limestone, accessed  by a walk over rough rocks). After the tour is over soothe your hunger with a scrumptious lunch followed by check in at the hotel.

Dinner at an Indian restaurant or in the hotel itself. Overnight in Pamukkale area.

After Breakfast, Check out from the hotel and be guided to Konya.

Visit to Mevlana Tomb and Mevlana Museum (It’s the  mausoleum of Jalal ad-Din Muhammad Rumi, a Turkish  Sufi mystic. It was also the dervish lodge of the Mevlevi  order, better known as the whirling dervishes).

Lunch at the Local Restaurant.  Photo Stop for Sultanhani Caravanserai (It is one of the most significant tourist attractions in central Anatolia,  also the largest and best preserved Seljuk caravanserai in  Turkey).

Check in and Dinner at the Hotel at, Cappadocia.

After the breakfast at the hotel  visit to KAYMAKLI UNDERGROUND CITY (There are 36  underground cities in Cappadocia and the widest one is  Kaymakli underground city, is built under the hill known  as the Citadel of Kaymakli and was opened to visitors in  1964. The people of Kaymakli (Enegup in Greek) village  have constructed their houses around nearly one  hundred tunnels of the underground city).

Visit to Goreme Valley – Panoramic View  (Former names of the town have  been Korama, Matiana, Maccan or Machan, and Avcilar.  When Göreme Valley nearby was designated an important tourist destination, a “center” for all  tourism in Cappadocia, the name of the town was changed to Göreme for practical reasons)

Visit to Uchisar Castle Panoramic view (Uçhisar, which  is situated on the edge of Göreme National Park, is  dominated by a 60-metre-high castle-mountain, which is visible over a wide distance and has the form of a large  cylindrical tower. This massif is crisscrossed by numerous underground passageways and rooms, which  are now mostly blocked or impassable).

Visit to Pigeon Valley (Pigeon Valley (also known as  Guvercinlik Valley) is among the most popular hiking  trails in Cappadocia, especially because it stretches  between Goreme to Uchisar. Along the route, you will  find cave dwellings, ancient paintings, earth pillars and  of course pigeons).

Visit to Devrent Valley (Devrent Valley in Cappadocia (also known as Imaginary Valley) is a  beautiful valley full of  unique rock formations, many of  which are said to resemble animal shapes). Visit to Pasabag ‘fairy himneys’ valley tour (Pasabag  Valley is one of the most popular spots in Goreme,  Cappadocia with its epic fairy chimneys and cave  dwellings).

Lunch at the Local Restaurant. Visit to Cavusin (which is an abandoned with Old Cave  Greek houses) is a village in the district of Avanos (It is a town and district of Nevşehir Province  in the Central Anatolia region of Turkey), Red River (also known as the Halys River is the longest  river entirely within Turkey. It is a source of hydroelectric power and is not used for navigation),  Pottery Workshop, Stone & Jewelry Workshop.

Last but not the least experience the most serene form of Turkish Dance Show – the Whirling Dervish after which a hot dinner will welcome you followed by a sound sleep at the comfort of the hotel. Dinner at the Hotel and stay overnight.

Breakfast at the hotel and then proceed to the Kayseri airport to catch a flight to Istanbul and further a connecting flight to India. 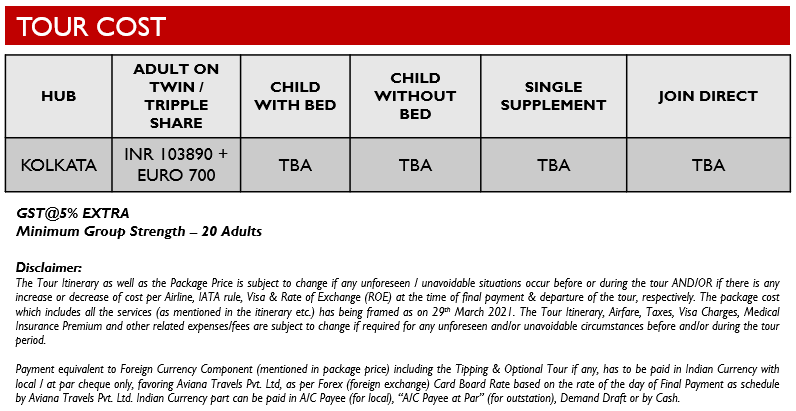  Valid passport must not be older than 10 years also it must be valid for at least SIX MONTHS longer than the intended stay. The passport must also have at least TWO BLANK PAGES.
 OLD passports are mandatory to be submitted along with the latest passport with Xerox copy of Bio, Address and all stamp pages.
 2 Recent Coloured Photograph (Fresh ones i.e. NOT used earlier for any visa) should be: –
o 2.5 x 2.5 inch in dimension, On matte finish paper, With White background, With 80% face coverage, non-smiling, ears should be visible, without glasses, a hat/cap or other head covering, unless the applicant wears such items because of their religious belief or ethnic background and not previously used in a visa.
 Personal Covering letter (addressed to Embassy of Greece), with mentioning duration of visit, purpose of visit, expenses clause. Details of all Applicants with name, passport number, If Applicable.
 Travel Insurance as per Schengen specification, matching with ticket dates with risk coverage of Euro 30,000.
 Confirmed Return Ticket (or ticket with Live PNR), covering all the sectors.
 Tour itinerary /Day to day Itinerary
 Confirmed Hotel as per the ticket (with hotel Name, Address, Telephone no and Email. Id) (Except for GTA Hotel Bookings).
 PAN Card copy, Mobile No. & Email ID is mandatory.
 Original updated Personal bank statement for last 6 months with bank seal and signature from the authorized person from the Bank two times for both the country. Address in Bank & Residence should be same.
 Personal Income Tax Return for Last 3 years.
 Occupation proof
o In case of Employee -Proof of employment (employment certificate, NOC) and Pay slip of last 3 months.
o In case applicant is the proprietor / owner of the company-,Cover letter on companies letter head ,company`s Original 3 month`s bank statement (with bank seal and signature), proof of paid income tax (for 3 years), company memo, partnership deal, establishment license or proprietorship etc are required.
o For student- leave letter, report card issued from School and ID is required.
o If the applicant is sponsored – proof of sponsorship and private accommodation by completing a national form of the Schengen State concerned (see the website of the Member State of destination), Bank Statement, ITR, and Occupation Proof.
o If the applicant is retired- Proof of retirement, pension statements for the last three months; – proof of regular income generated by ownership of property or business.
 If applicant is travelling for honeymoon then Marriage certificate or Marriage Card and Engagement /Marriage Photograph (Fresh ones i.e. NOT used earlier for any visa) are required.
 If minor is accompanied by one parent/travelling alone shall provide a NOTARIZED NOC from other/both parents with their passport copy.
 KINDLY PROVIDE ALL THE DOCUMENTS 2 SETS IN A4 SIZE. BIOMETRIC MANDATORY for all Applicants.