Day 1 Assemble and Depart From Kolkata

DAY ZERO: ASSEMBLE 3 HOURS PRIOR TO DEPARTURE FROM KOLKATA

Welcome to the world of avianaHolidays– the leisure unit of IATA accredited Aviana Travels Pvt. Ltd, having goodwill of 26 years in Travel & Tourism arena. Our experienced and pleasant Tour-Director, who will be with you throughout, will meet & greet you at the International Terminal in Kolkata International Airport 3 hours prior to departure. She / He will assist you with immigration & custom formalities before boarding flight scheduled to leave Kolkata for Jakarta via Bangkok. Your luggage will need to be tagged directly to Jarakrta from Kolkata itself.
[MEAL ON BOARD]

Upon arrival in Soekarno – Hatta International Airport, you will be transferred to restaurant for Lunch. After lunch continue our journey to visit National Monument, National Museum & Glodok with Jakarta city tour. After completing proceed to restaurant for dinner followed by check in to designated Hotel.

[MEALS ON BOARD, LUNCH, DINNER]

After having breakfast, you will proceed for Tangkuban Perahu – an active volcano, situated 30 km north of the city of Bandung in the direction of Lembang. It is the only crater in Indonesia that you can drive up to its very rim. Mount Tangkuban Perahu has a distinctive shape, and looks like an “overturned boat”.

Enjoy your lunch near Volcano then transfer to Ciater’s Revitalizing Hot Springs – The town of Ciater is known for its natural hot springs with their healing qualities which promote physical well-being. Enjoy your dinner at restaurant followed by check in to our designated hotel.

Have early breakfast and check out from Hotel. You will be transferred to Jakarta railway station to board train for Jogjakarta. The best mode of Transportation to Travel between Jakarta to Jogjakarta. You will definitely be impressed by the scenic beauty through the untouched nature of Indonesia. Enjoy your lunch in train. Upon arrival to Jogjakarta visit Candisewu Temple (if time permits). Have your dinner in local restaurant followed by check in to Hotel for 2 Nights.

[BREAKFAST, LUNCH ON BOARD, DINNER]

Have your breakfast in Hotel. Then you will be transferred to Borobudur Temple. Borobudur Temple known as World’s biggest buddhist monument – an ancient site widely considered to be one of the world’s seven wonders. The temple sits majestically on a hilltop overlooking lush green fields and distant hills. Built in the 9th century during the reign of the Syailendra dynasty, the temple’s design in Gupta architecture reflects India’s influence on the region, yet there are enough indigenous scenes and elements incorporated to make Borobudur uniquely Indonesian.
After lunch we will proceed for Prambanan Temple – known as the Largest Hindu temple of South East Asia.

Then we will proceed for Purawisata to enjoy Ramayana ballet performance. Enjoy dinner at Local restaurant followed by check in to designated hotel.

After a relaxing breakfast check out and proceed for famous Malioboro Street which is famous shopping destination among the tourists. You can buy souvenirs as well as famous Batik – the traditional Indonesian art of decorating and dyeing fabrics. Yogyakarta is well known hub for Batik. Have lunch in restaurant then proceed to airport to board flight to Denpasar airport in Bali. Upon arrival to Bali proceed to local restaurant for dinner followed by check in to hotel for continuous 5 days. Overnight in Bali.

After breakfast, drive to the Royal Temple of Mengwi – Taman Ayun. Dating from 1634, this picturesque complex surrounded by a moat with multi-roofed meru shrines and intricately carved wooden gates. Lunch at restaurant.

Next stop is Tanah Lot – the rocky temple in the middle of the ocean.
After having lunch in local restaurant continue our journey to Uluwatu temple – Temple on the cliff with beautiful sunset view. Enjoy stunning sunset from the Temple. Dinner at local restaurant. Transfer back to hotel for overnight stay.

Enjoy breakfast in hotel then transfer to full day KIntamani tour. Kintamani is famous for stunning lake and volcano views. You will definitely enjoy Batubulan Village to see barong dance performance, Celuk the center of gold and silver works, Mas the center of woodcarvings, Batuan Village for beautiful Paintings.

Lunch at local restaurant. Visit Tirtampul – Holy soring temple and Tegemungan waterfalls. Enjoy the beauty of Ubud by visiting Ubud Palace & Ubud market. You can collect some beautiful souvenirs from the market. Spend some free time in Ubud. After that have your dinner at local restaurant. Return to hotel for night stay.

After having Breakfast, spend this day by visiting the stunning picture-perfect beaches of Bali. You will visit: Kuta Beach, Seminyak Beach, Nusa Dua Beach, Pandawa Beach – Secret beach with statues of Pandawa Lima and Kunti at the cliff, Melasti Beach, Jimbaran Beach. Enjoy a romantic Indonesian Dinner at Jimbaran Beach. After dinner, return to Hotel for overnight stay.

Day 9 Bali – Board Flight To Kolkata

Enjoy relaxing breakfast at hotel, spend your free time until check out. After lunch in restaurant drive to Ngurah Rai International Airport to board flight to Kolkata via Bangkok. Your connecting flight from Bangkok to Kolkata will arrive at ETA 00:40 am in the midnight which is technically Day Ten. Complete your Immigration procedure and collect your luggage. Bid Good Bye to all your friends including Tour Leader – met during the tour. Tour ends here.

[BREAKFAST, LUNCH, MEAL ON BOARD] 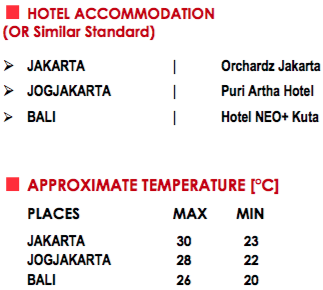 1) The Package Cost is based on a group of minimums of 30 Adults at the time of final boarding.

2) Optional Tour Prices, if any, are applicable if the minimum group number meets of 25 adults.

NB: The Tour Itinerary as well as the Package Price is subject to change if any unforeseen/unavoidable situations occur before or during the tour AND/OR if there is any increase or decrease of cost per Airline, IATA rule, Visa & Rate of Exchange (ROE) at the time of final payment & departure of the tour, respectively. The package cost which includes all the services (as mentioned in the itinerary etc) has being framed as on 15th JANUARY 2020. The Tour Itinerary, Airfare, Taxes, Visa Charges, Medical Insurance Premium and other related expenses/fees are subject to change if required for any unforeseen and/or unavoidable circumstances before and/or during the tour period.

Payment equivalent to Foreign Currency Component (mentioned in package price) including the Tipping & Optional Tour if any, has to be paid in Indian Currency with local / at par cheque only, favoring Aviana Travels Pvt. Ltd, as per Forex (foreign exchange) Card Board Rate based on the rate of the day of Final Payment as schedule by Aviana Travels Pvt. Ltd. Indian Currency part can be paid in A/C Payee (for local), “A/C Payee at Par” (for outstation), Demand Draft or by Cash.