Welcome to the World of aviana holidays, the leisure brand of IATA (International Air Transportation Association) accredited Aviana Travels Pvt. Ltd, serving more than 26 Years with goodwill in the space of Travel and Tourism.

Assemble 3 hours prior to flight departure time, at Netaji Subhash Chandra Bose International Airport,
Kolkata to board flight on Emirates Airlines for Dubai. Breakfast will be served on board. Arrive Dubai at
12:50 pm (local time) and take a connecting flight to Cairo reaching at 17:15 pm. Your luggage will be tagged till Cairo from Kolkata itself.

[MEALS ON BOARD, DINNER]

After breakfast, proceed for the guided tour of Saqqara, the Step Pyramid followed by Great Pyramids of
Giza. Later you visit the famous SPHINX near Cheops.

The Great Pyramid of Giza (also known as the Pyramid of Khufu or the Pyramid of Cheops) is the oldest and largest of the three pyramids seen at the Giza Necropolis bordering what is now El Giza, Egypt. It is the oldest of the Seven Wonders of the Ancient World, and the only one to remain largely intact. Egyptologists believe that the pyramid was built as a tomb over a 10 to 20-year period concluding around 2560 BC.

Saqqara also spelled Sakkara or Saccara in English, is a vast ancient burial ground in Egypt, serving as the necropolis for the Ancient Egyptian capital, Memphis. Saqqara features numerous pyramids, includingthe world famous Step pyramid of Djoser, sometimes referred to as the Step Tomb due to its rectangular base, as well as a number of mastabas (Arabic word meaning ‘bench’).

At Saqqara, the oldest complete stone building complex known in history was built: Djoser’s Step Pyramid, built during the Third Dynasty. Another 16 Egyptian kings-built pyramids at Saqqara, which are now in various states of preservation or dilapidation. High officials added private funeral monuments to this necropolis during the entire pharaonic period. It remained an important complex for non-royal burials and cult ceremonies for more than 3,000 years, well into Ptolemaic and Roman times. Later, visit the perfumery: Since time immemorial the Egyptians have been extracting essential oils for essences. Here you have a chance to experience the aromas like ‘The secrets of the desert,’ ‘The lotus’ and all popular international designer perfumes and colognes.

The Papyrus was first made in ancient Egypt. Learn how to manufacture this paper using papyrus reeds and avail of an opportunity to buy some hand painted papyrus. This will be followed by dinner in a restaurant. Return to the hotel for overnight stay in the eternal city, Cairo.

After breakfast, check out of hotel and you will be taken to visit the Egyptian Museum with the guidance of an Egyptologist, to explore an enormous collection of over 100,000 items ranging from the 18th to the
20th Dynasties.

Next, we will take you to explore the famous Khan-El Khalili Bazaar – A Charming Labyrinth of Narrow Alleys and the famous Oriental Bazaar. No visit to Cairo is Complete without a stop at the Khan El-Khalili bazaar, where you will be transported back in time to an old Arab souk for couple of hours of exclusive shopping.

Later you will be transferred to the station to board the luxury AC Train for Luxor. Dinner will be served in your coupe itself. Stay overnight in the 2 bedded, comfortable coupes on the train.

Have your breakfast in the train. Our local representative will meet & greet after you arrive at Luxor Station in the morning.

Now we will start Sightseeing in Luxor (West Bank) with the Vast Valley of Kings. The Valley of the gates of the Kings, is a valley in Egypt where, for a period of nearly 500 years from the 16th to 11th century BC, tombs were constructed for the Pharaohs and powerful nobles of the New Kingdom. Visit the Temple of Hatshepsut – El Deir El Bahari: The Mortuary Temple of Queen Hatshepsut, the Djeser-Djeseru, is locatedbeneath the cliffs at Deir el Bahari on the west bank of the Nile near the Valley of the Kings in Egypt. You find Ramsey rulers and Tutankhamen Tomb (Optional visit) within the valley.

Transfer to the luxurious Cruise on Nile. Check in to your cabin and your journey begins for a minimum of 3 nights on the famous 5 Star Nile Cruise®. Enjoy International Buffet Lunch in the cruise. Spend the evening on the Sun-Deck and experience the vastness of river Nile. Delicious International Buffet Dinner will be served. Stay overnight on the Cruise.

It’s Important for the travelers to know the latest features and itinerary of the Cruise Liner which will be furnished day-to-day on the cruise, itself. Program may differ/change from the existing itinerary…as mentioned herewith.

[BREAKFAST ON BOARD, LUNCH & DINNER IN CRUISE]

After having your breakfast, you will be escorted by guide for a tour of the East Bank in Luxor. Visit Huge Karnak and Luxor Temples to feel the eternity of Egyptian era. The Karnak Temple Complex, commonly known as Karnak, is a vast open-air museum, and the second largest ancient religious site in the world, after the Angkor Wat Temple of Cambodia. It is believed to be the second most visited historical site in Egypt; only the Giza Pyramids near Cairo receive more visits. It consists of four main parts, of which only the largest is currently open to the general public. The term Karnak often is understood as being the Precinct of Amun-Ra only.

The Luxor Temple is a large Ancient Egyptian temple complex located on the east bank of the Nile River in the city today known as Luxor (ancient Thebes) and was founded in 1400 BCE.

Return to cruise again for Lunch at the end of the tour. Enjoy your evening on the Deck with a cup of Tea and snacks. Enjoy the Deck till Buffet Dinner is served on the cruise.

Enjoy your Breakfast in the Cruise. Then begin sailing to Edfu and cross Esna lock gate. Visit Edfu (a brisk ride in a horse-drawn carriage brings you through the town of Edfu to the Temple of Horus, (also known as the Temple of Edfu) considered the best-preserved cult temple in Egypt. This is partly because it was built later than most: in the Ptolemaic era from 237 to 57 BC. Yet despite its later date, it exactly reflects traditional pharaonic architecture and so provides an excellent idea of how all the temples once looked. It is also the second largest in Egypt after Karnak Temple.

Return back to cruise and after lunch we’ll proceed to Kom Ombo and visit the temples of Sobek the crocodile god. Later you have your Buffet Dinner on the Cruise.

Today your wakeup call will buzz very early in the morning as we proceed to the Abu Simbel Temples – the most attractive place of Egypt with a government appointed escorted tour. Before you start, do not forget to have early tea and collect your packed breakfast. Departure from cruise will be at approx 3 am in early morning.

The massive rock twin temples were originally carved out of the mountainside during the reign of Pharaoh Ramesses II in the 13th century BC, as a lasting monument to himself and his queen Nefertari, to commemorate his victory at the Battle of Kadesh.

On your way back, visit High Dam, the largest rock filled Dam in the world. Witness one of the best engineering feats of 20th Century on Lake Nasser. With a surface of 4000 sq. km, Lake Nasser lies under the Dam. Take a photo stop at Nasser Memorial Tower. After lunch, enjoy Felucca Sailing on River Nile. Return back to your hotel. Spend your last night in historic Aswan city.

After breakfast, check out from hotel and free time for leisure. Later you will be transferred to the station to board the luxury AC Train for Cairo. Dinner will be served in your coupe itself. Stay overnight in the 2 bedded, comfortable coupes on the train.

Have your breakfast in the train. Our local representative will meet & greet after you arrive at Cairo Station in the morning. Now we will proceed for Alexandria (Mediterranean port city in Egypt). After reaching Alexandria, we will visit the great Alexandria International Library. The vastness, architecture and huge collections, make Alexandria Library popular worldwide. The New Library of Alexandria, the New Bibliotheca Alexandrina is dedicated to recapture the spirit of openness and scholarship of the original.

[BREAKFAST ON BOARD, LUNCH, DINNER]

After breakfast, check out and proceed for Montazah Garden & Palace. It was built on a low plateau east of central Alexandria overlooking a beach on the Mediterranean Sea. Next visit the Catacombs of Kom el Shoqafa (meaning ‘Mound of shards’ or ‘Potsherds’)a historical archaeological site located in Alexandria and considered one of the Seven Wonders of the Middle Ages.

Next transfer to Cairo International Airport to board the flight for Dubai, scheduled to depart at 19.20 pm. Dinner will be served on board.

Day 11 Back to Kolkata

Emirates Airlines leaves for Kolkata at around 02.00 am early in the morning. The flight is scheduled to arrive in Kolkata at 07:40 am. After immigration collect your luggage which has been tagged from Cairo Airport. Bid Goodbye to your friends, met during the tour. Tour Ends here. 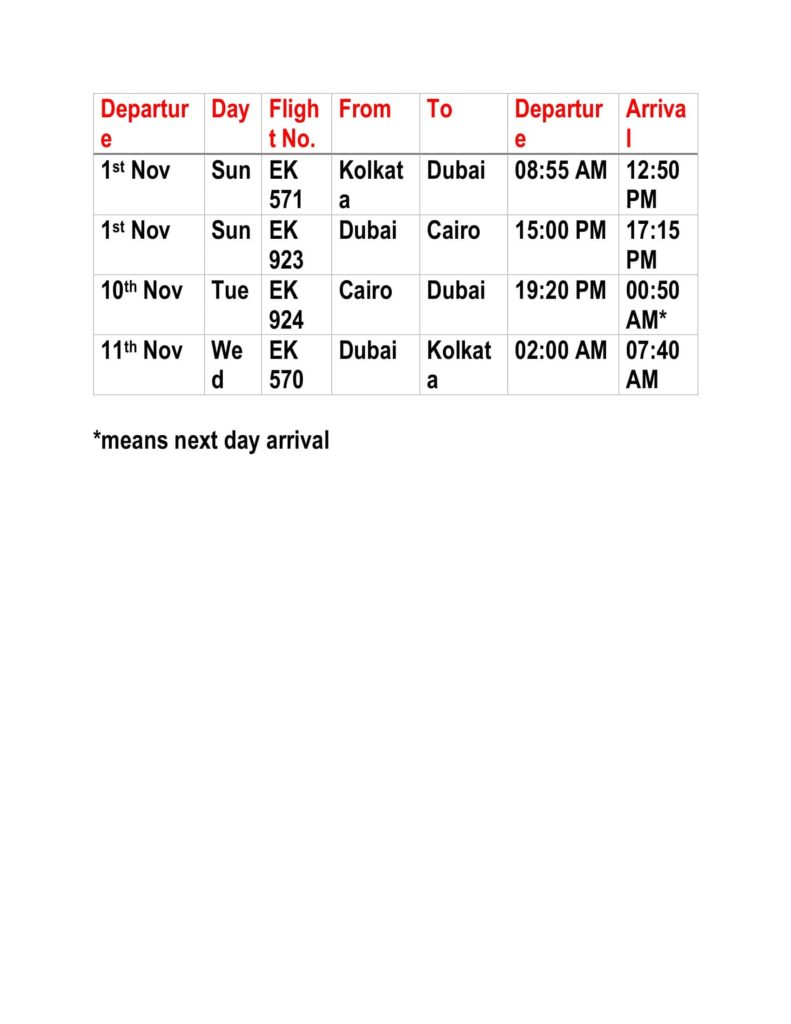 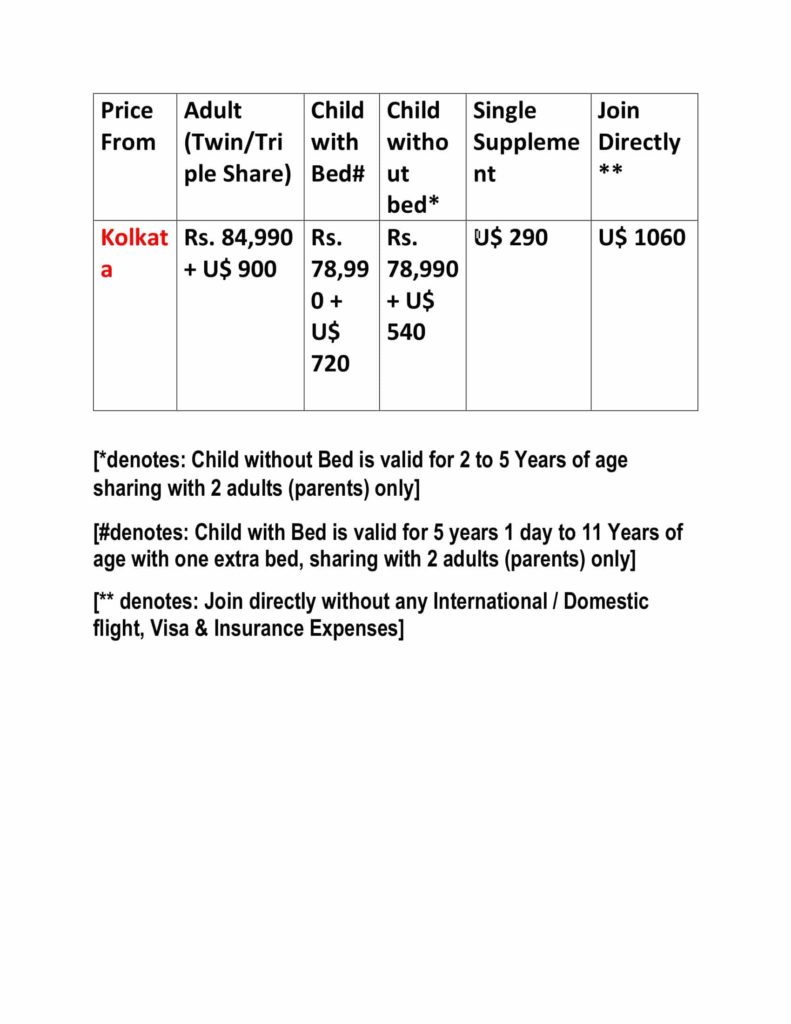 The Package Cost is based on a group of minimums of 40 Adults at the time of final boarding.Optional Tour Prices, if any, are applicable if the minimum group number meets of 15 adults.

NB: The Tour Itinerary as well as the Package Price is subject to change if any unforeseen/unavoidable situations occur before or during the tour AND/OR if there is any increase or decrease of cost per Airline, IATA rule, Visa & Rate of Exchange (ROE) at the time of final payment & departure of the tour, respectively. The package cost which includes all the services (as mentioned in the itinerary etc) has being framed as on 31ST DEC 2019. The Tour Itinerary, Airfare, Taxes, Visa Charges, Medical Insurance Premium and other related expenses/fees are subject to change if required for any unforeseen and/or unavoidable circumstances before and/or during the tour period.

Payment equivalent to Foreign Currency Component (mentioned in package price) including the Tipping & Optional Tour if any, has to be paid in Indian Currency with local / at par cheque only, favoring Aviana Travels Pvt. Ltd, as per Forex (foreign exchange) Card Board Rate based on the rate of the day of Final Payment as schedule by Aviana Travels Pvt. Ltd. Indian Currency part can be paid in A/C Payee (for local), “A/C Payee at Par” (for outstation), Demand Draft or by Cash.