Our experienced and pleasant Tour Manager who will be with you throughout, will meet & greet you at the International Terminal in Kolkata International Airport 3 hours prior to departure.

Don’t forget to tag your luggage till Amman. Upon arrival you will be received and assisted by our local representative to complete the visa and customs formalities. Then drive to the north of Amman called Jerash, a closely positioned second to Petra on the list of most favorite destinations in Jordan. While on tour lunch will be served.

JERASH: Located 48 km north of Amman and nestled in a quiet valley among the mountains of Gilead, is the grandeur of Imperial Rome being one of the largest and most well preserved sites of Roman architecture in the World, outside Italy, its paved and colonnaded streets, soaring hilltop temples, handsome theaters, spacious public squares and plazas, baths, fountains and city walls pierced by towers and gates remain in exceptional condition. The ancient city of Jerash boasts an unbroken chain of human occupation dating back more than 6500 years.

The city’s golden age came under Roman rule and the site is now generally acknowledged to be one of the best preserved Roman provincial towns in the world.

After breakfast we will drive towards Petra, we will visit Madaba “The City of Mosaics” on our way. Thereafter we will proceed for Mt. Nebo, the burial ground of Moses. After the tour we will have Lunch.

After Lunch we will drive down to Aqaba, Aqaba is a fusion of history, nature and city life surrounded by picturesque mountains and blue sea. Bathing in its year-long warm sun, Aqaba invites you to relax on its beaches, partake in the exhilaration of its water sports, and explore the coral reefs of the Red Sea, home to hundreds of different types of corals and sponges with their wealth of colored fish.

Check-in at the hotel. You will get free time to explore your own time in Red sea beach, dinner & Stay overnight in Aqaba

After breakfast, check out from the hotel. We drive through the vastness of Desert to explore the Unique Desert of the World – Wadi Rum, with the exclusive 4×4 wheel safari for 2 hours.

Wadi Rum is a protected area covering 720 square kilometers of dramatic desert wilderness in the south of Jordan. Huge mountains of sandstone and granite emerge, sheer-sided, from wide sandy valleys to reach heights of 1700 meters and more.

Narrow canyons and fissures cut deep into the mountains and many conceal ancient rock drawings etched by the peoples of the desert over millennia. Bedouin tribes still live among the mountains of Rum and their large goat-hair tents are a special feature of the landscape. Wadi Rum is called the rarest of the rare Stone Desert on earth. Lunch to be taken while on tour at Wadi Rum.

After dinner we will proceed for our most awaiting lifetime experience tour, Petra By Night. Complete your Petra experience with a visit of Petra by Night. This event is a magical way to see part of the rock city by candlelight, which has become a world wonder.

After the memorable tour we Will back to Petra hotel and stay overnight.

After breakfast we will visit again and explore on foot to unwind one of the 7 Wonders of the World – PETRA with an exciting horse ride.

PETRA is the treasure of the ancient world, hidden behind an almost impenetrable barrier of rugged mountains, boasting incomparable scenes that make it the most majestic and imposing ancient site still-standing. It has been said “perhaps there is nothing in the world that resembles it”. It is the legacy of the Nabataeans, an industrious Arab people who settled in southern Jordan more than 2000 years ago. Admired then for its refined culture, massive architecture and ingenious complex of dams and water channels, Petra is now a UNESCO WORLD HERITAGE SITE and one of The New 7 Wonders of the World that enchants visitors from all corners of the globe.

After a relaxing Lunch we will drive up to the capital city Amman where post a sumptuous dinner rest in the comfort of the hotel for an overnight.

Today after breakfast set out for an orientation tour of Amman with visit to Citadel at first – The Amman Citadel is a historical site at the center of downtown Amman, the capital of Jordan. The L-shaped hill is one of the seven hills that originally made up Amman. Evidence of occupation since the pottery Neolithic period has been found and the hill was fortified during the Bronze Age.

The Temple of Hercules is the most famous site within the Amman Citadel. The temple was built by the Romans and today only a few parts of the structure remain. Visitors flock to the citadel to see the glorious hand that is believed to be the hand of a large Roman statue of Hercules.

Next we proceed to Roman Theatre of Amman – Amman’s Roman Theatre is a 6,000-seat, 2nd-century Roman theatre. A famous landmark in the Jordanian capital, it dates back to the Roman period when the city was known as Philadelphia.

Rainbow street at the downtown is also something to go for – Located in Jabal Amman, One of the oldest areas in Amman, You can find bars, Restaurants, And ice cream shops. Rainbow Street, named after Rainbow Cinema near it’s intersection with the 1st Circle.

While on tour of the City enjoy lunch. Post the Old and New City tour of Amman return to your hotel. Evening enjoy a fulfilling dinner and spend the night in your cozy hotel.

After breakfast, proceed to Dead Sea coast in Jordan, located at the lowest spot on earth, at more than 400 meters below sea level, is a spectacular tourist attraction. It’s warm weather, filtered sun rays, oxygen-rich air, famous mineral-rich black mud and curative waters make it the largest natural spa in the world.

Its water is known for being rich in healing properties, stress-combating Magnesium, body-energizing and moisture-balancing Potassium and water retention preventing Calcium. It also contains Bromide, which eases muscle stiffness and Sodium, which is essential for lymphatic fluid balance.

Have Dinner and stay overnight in Dead Sea Resorts.

Today morning get ready and finish your breakfast. Check out by 8:30AM to board the coach and transfer to Queen Alia International Airport to board our return flight home. 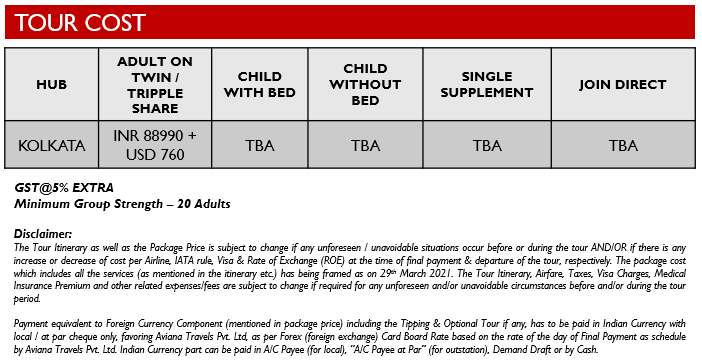